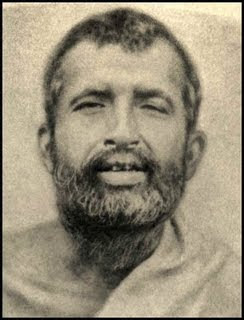 This is the perfect book for the intellectual and the confused spiritual seeker. For it has a one point direction: from the head to the heart. Where it leaves you, singing and dancing, within and without.

The Gospel of Shree Ramakrishna is a big book, in fact it is two fat volumes. With a book this big, the first impulse is to open it in the middle somewhere and start reading. Not a good idea. This story deserves to be read from the beginning, for that is where the punch is.

M., or Mahendranath Gupta, the author, was a learned man, or so he thought. On his first visit to the Master, he is deeply charmed by the eloquence in Ramakrishna’s words. ‘He must be well read,’ is M.’s response. He is shocked that the Master hasn’t read a single book in his life.

But the taste of bliss in his gut brings him back to Dakshineshwar the next morning, when the Master is getting shaved.

The second meeting is more intimate, with a one to one conversation.

Sri Ramakrishna: Are you married?

Sri Ramakrishna (with a shudder): Oh, Ramlal! Alas, he is married!

Like one guilty of a terrible offence, M. sat motionless, his eyes on the ground. He thought, ‘Is it such a wicked thing to be married?’

The Master(continues): ‘Have you any children?’

M. this time could hear the beating of his own heart.

M. (whispers in a trembling voice): ‘Yes, sir, I have children.’

‘Ah me! He even has children!’

Thus rebuked, M. sat speechless. His pride had received a blow. After a few minutes, the Master looked at him kindly and said,

‘You see, you have certain good signs. I know them by looking at a person’s face. Tell me, what king of person is your wife? Has she spiritual attributes, or is she under the power of avidya?’

M.: She is alright. But I am afraid she is ignorant.

Master: (with evident displeasure) And you are a man of knowledge?

M had yet to learn the distinction between knowledge and ignorance. He was under the impression, as we all are, that you get knowledge from books and schools. Later he learnt from the Master that to know God is knowledge and to not know him is ignorance.

This is an excerpt from the first chapter of the book, when M. meets the master. There is hardly any reference to M at all after this. M simply records everything as he saw and heard as he sat quietly at Sri Ramakrishna’s feet.

Sri Ramakrishna is basically oriented towards the devotional aspect of spirituality. However, he does not prescribe rituals of devotion. What he prescribes is an intense yearning for God. ‘Cry to God with all your heart and you shall surely see him.’

This one sentence, if taken to heart, can be extremely cathartic in nature. ‘Crying to God’, done on a regular basis, can turn the mind within. It can also become a hotline to the Maker.

When he meets someone for the first time, the master asks, ‘So do you believe in God with form or do you believe in the formless aspect of God?’ The utter simplicity and clarity in this question reveals the understanding of Sri Ramakrishna: he is the embodiment of the meeting of Gyana and Bhakti.

This book is a witness to the happening of another saint, Swami Vivekananda. Ramakrishna displays more than a simple affection for Narendra, the Guru literally pines for his disciple.

After all, he has a big job to do there: passing on the legacy of the inner spirit of India.

Ramakrishna was guileless; he lacked the sophistication of the city dweller. He is supposed to have used a lot of off-color jokes which were edited out of the English version. Somehow this goes against the spirit of the book, which is basically the complete flow of the master’s words, unedited, even by the master himself.

What I liked about the book:

There is story about Swami Vivekananda and the mother Kali. After the demise of his father, Swamiji was facing a very rough patch at home. He was jobless and the kitchen fire was out. Sri Ramakrishna advised him to go to the Mother’s temple and ask for her help. She who runs the universe will surely give him a job, some stable income to feed his family.

Instead of asking for the vitamin M, all Swamiji could ask for were devotion and knowledge. Again and again he went, each time he forgot. Finally he realised that the master was playing a trick on him. He was teaching him that the only things worth asking from the Goddess, were spiritual.

I feel that Sri Ramkrishna’s blessings work like this trick in this book. Once you get hooked to it, the rose tint enters your eyes. Life is not the same again.

Here is a link to a zoom in to the book.

Posted by Manjushree Abhinav at 8:59 AM 4 comments: