is a simile for the writers block.

In the creative writing class today, I said that the writers block, in fact, is something to be worshiped rather than feared.

'Why?' asked the once burnt student, someone who has really faced the goddess.

because, I said, the writers block is the womb of all that is written. It is the source of inspiration.

just like cotton is the mother of thread, a writers block is the space where words are so pure that they don't even have an identity yet.

before a word became thread, it was shapeless, like a cloud of cotton.

we could give up

our clothes and float

if you don't get this, don't worry. enjoy this song.
Posted by Manjushree Abhinav at 10:43 PM 10 comments:

And I am now a teacher

Film maker to novelist to school teacher. Each jump has been quite exiting, I must admit. Creatively exhaustive.

I used to say that I was the happiest when I wrote the novel. But when I stand in a class and look at the fresh and alive stream of naughty kids, sometimes I feel on top of the world. Sometimes teaching happens in a flow so gushing, all I can feel is grateful.

Teaching children is a calling. I am so so glad I answered the call.

That I didn't wait for the elusive next birth before I simplified my life. :) Smarter than Einstein, aren't I?

Here is a sample of what happens in my class.

The lesson in the English text book (class 5), is, 'A flash of light.'

A frenchman, on a cold night, offers some money to a blind beggar. The beggar tells him that he has given him a frank instead of a sou. The man is astonished that a blind man can tell the difference so quickly and the flash of light spurs the birth of Braille.

Student: Can we also learn braille?

Teacher: Well, it is possible, but it will take you longer than those who are blind.

Teacher: Because, their sense of touch is more developed.

Home work: Blind fold yourselves under supervision and walk around in your house for ten minutes and write the experience.

Student 1 : I stepped on my brothers feet and he hit me.

Teacher writes on the board: Difficulties with siblings

Student 2: My mother was worried that I might fall.

Student 3: Miss, I did not blindfold myself totally. I cheated a bit. I was scared.

Student 4 : Miss, I walked around a bit, using my hands to guide me.

Einstein is now a plumber

By the end of his life, Albert Einstein started believing in rebirth. To refresh your memory about Einstein, he is the same scientist who gave us the equation E = mc2
and told us that energy can neither be created nor destroyed. He also had a driver who was very smart, and who made it to my blog here.

So at the end of his life, Einstein was in a hospital, sick, in bed. His chelas asked him,

'Master, what will you be in your next life? How will we find you?'

'I will be a plumber!' said Albert.

'Yes, I want to be a plumber in my next life. I have given out a few truths to the world, but to be very honest, I lied to myself.

When I was a kid, I was fascinated by plumbers. But my mother, then my school, and later the entire society gave me the idea that I was made for other things, and I went along. The fact is, I am still fascinated by plumbers and in my next life I am going to be a plumber. I have had enough of science and blah blah blah. Goodbye.'

So if you see a plumber whistling as he works, stop by and take a pause. Here could be a man who has relinquished the rat race after winning it. Here is a person who is happy just to be.
Posted by Manjushree Abhinav at 10:23 PM 4 comments: 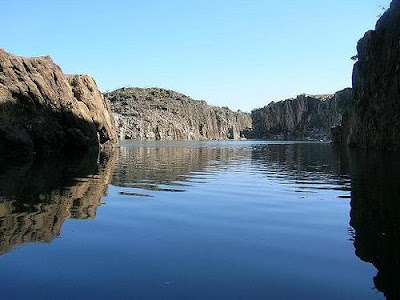 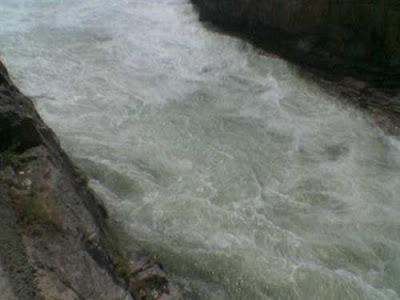 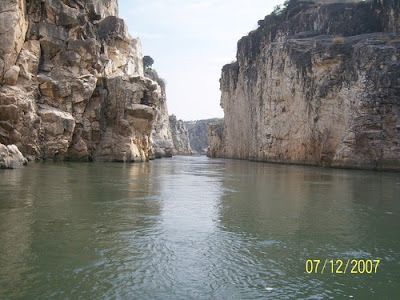 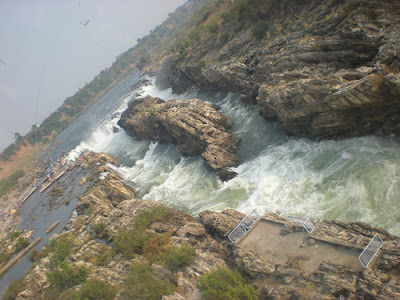 He wore white, and carried just one more pair of clothes. He wasn't barefoot, he wore slippers, but by the end of it he had blisters on his feet. He begged for food, but no, he was not a sanyasi. He was on one of the most beautiful pilgrimages I have ever dreamed of : walking around the deep and serene Narmada Ma. The enchanting and the mysterous Goddess on earth, Shiva's daughter, blessed with eternal beauty.

When he came home, I felt like touching his feet and I did.

These are a few of the stories he shared with me, that I share with my pen.

'My daily schedule was to get up at four, take a dip in the river, start walking. By ten, the sun would be scorching, so take a break. If you are tired, take some rest in a temple or a school courtyard. Then by sunset, again take a dip in the water and start walking. If you see an ashram on way that apeals to you, stay for a couple of days to meditate.

Begging for food has a style. You go to people's homes and say, 'Narmade Har!' I never once went hungry. People served me with so much love, and devotion, and the trust was the most amazing thing... none ever asked me my name.

And the families were so poor, they had barely enough food for themselves. But they all consider it their duty to feed us, the parikrama vasis, because we are doing something for Narmada maiiya.

All of them have an unshakable faith and devotion for the maiya. "Maiya degi," (Mother will provide), they would say, if I asked them how they would manage.

In the beginning, I thought, I will give it back to them. I will come back in a car with gifts for everyone... and I felt good with such thoughts. But later I realized, thats not the point. I have to become them. I have to carry the heart of India to its cities. 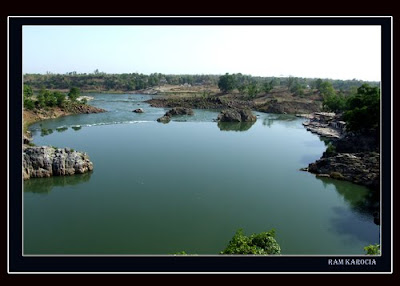 Their is of cource the physical aspect, the grandeur, the beauty of the river. But the effect on the being is deep. Something happens to you. There are days when you have to walk a few kilometers off the river, when you cannot see it.

And thats when the Mother aspect dawns on you, when you begin to yearn for it like you yearned for your mother when
you were a child.


One day, it was around four in the evening. I had been walking for days without a glance of the Maiya, and suddenly, she was there. I started running towards it, and suddenly a sadhu stopped me . He said, 'Go and call your mother. Right now.' 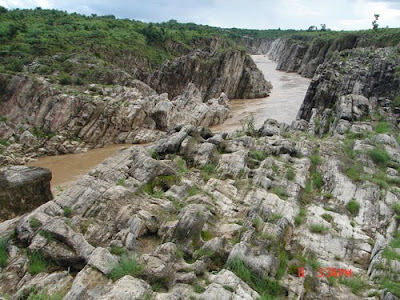 So I hunted for a cellphone in the village and called my mom. She was kind of missing me, and was glad to speak to me. I was also happy to connect to her.

And then I entered the water, as the sun was going down. It was so so beautiful, the way I was welcomed by its warmth.

The next morning I sought out the sadhu. He had a kutiya by the river and he had two cows.

For a half hour we just sat silently, by the flowing river. Then he told me his story. His mother passed away when he was seven. Thereon he was with his master, in a gurukul. When he was seventeen, he attained to the state of contentment. And he asked his master, 'Tell me what to do now, so that I may spread the word.'

His master took him to the cowshed of the gurukul and pointed to two newborn calves. 'Take them with you and look after them as if you are their mother. Thats all you need to do.' And thats all he does. He has a kutiya with these two cows by the river.

'Don't ever forget your mother, the one who cared for you. It is because my mother is no more that I am here. Take care of your mother. Give her her due.' the sadhu told me. (to be continued) 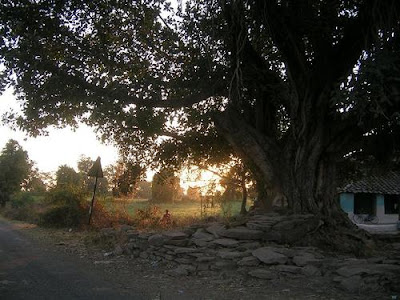 Its been a long time since I reviewed a movie on this blog. Thats because these days I find movie watching tiring.

Yes, to be honest, Paa was also a movie that made my blood all jammed up by the end of it. But still, it was a movie worth watching.

Surprisingly, it was not disgusting. Amitabh plays a kid who has the body of an old man, and an enlarged, venous head. And yet, and yet, he manages, to steal your heart.

Humorous dialogues, dubbing, treatment, co-actors, and camera work get the credit. The mis-en--scene. Not Amitabh. Because one doesn't ever see him. not even his eyes remind you of the star.

All you can see is a naughty child who calls his granny Bum and has an attitude of a regular kid.

At the most, a kid with a good dialogue writer behind him.

Here is account of how BIG B became Auro: 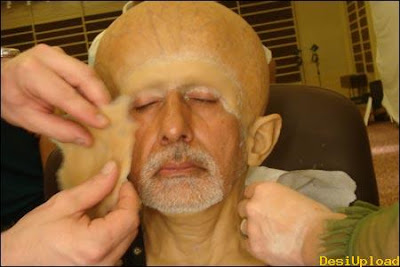 The most Herculean task about the latest release PAA was transforming a 67-year old Amitabh Bachchan into 13-year old child Auro, suffering from a
rare disorder called progeria.

The prosthetic makeup, as we know, has been done by Hollywood's Christien Tinsley (THE PASSION OF THE CHRIST, CATWOMAN) and Dominie Till (THE LORD OF THE RINGS TRILOGY).

According to the reports Bachchan's make-up cost 10 per cent of the total
budget. It is learnt that it used to take four to five hours daily for Amitabh
Bachchan's makeup to be done for his film PAA.


Not only this, if it used to take four hours to put on the make-up then two
hours to remove it. There are eight different layers of clay which has been put in his make up in the film.

While applying the make up he could not eat, drink and talk for four hours. Most of the performance comes out because of the make up.

Big B wore specially designed dentures so as to effortlessly replicate the
voice of a 13-year old child.He gets a lisp and his speech pattern gets altered because of the extra teeth. He wore the dentures throughout the film's shooting and also had them on while dubbing.

Infact he has also sung a song in his voice wearing these dentures, which
sounds like a child. But Big B never ever showed a sign of panic, on the contrary he was always co-operative, patient, cool and full of enthusiasm. 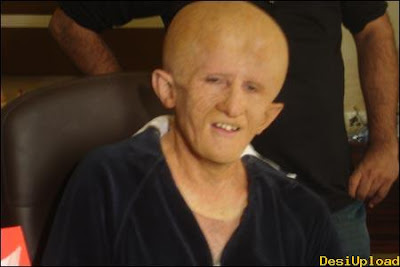 Posted by Manjushree Abhinav at 9:15 PM No comments: