Power of a Story

Writing the Story is fun because it takes you up on a parachute, and you get to play God. If God wants you to get uplifted, he will inspire you to write a story.
This is the first session in the creative writing class, and it is inspired by a master scriptwriter of the Indian Screen: the writer of awesome films like the 'Legend of Bhagat Singh', 'Rajneeti', 'Satyagraha', 'Ghulam', etc.

A story is more powerful than morals, than truth, than you. -Anjum Rajabali.

Why is a story more powerful than
a ) morals.

I remember a text book called Community Work, from the pre primary level of school. After every chapter, they had a sub title in bold, ‘Moral of the story’. So it is drummed into our heads, that stories are all about morals. However, in our experience, our life long and on going love affair with mythology, movies and literature,  proves the opposite. Stories take us beyond morality. They take us to the field which is beyond good and bad, where Rumi promised to meet us.

A story can take you from good to bad in moments. A master storyteller, like Alfred Hitchcock, does this so effortlessly in the film, Psycho. A young woman is murdered ruthlessly in the shower by this sick character called Norman Bates. After she is dead, Norman cleans the shower of all the blood stains. Then he wraps her dead body in a carpet and takes it down the stairs in the dark of the night. He puts her in her cars dickie and drives away. He reaches a pond, where he manages to push the car in. And he stands there, watching the car sink slowly in the water. Just as it is about to sink totally below the surface, the car stops sinking. We see Normans tense face and at that moment, all of us have a deeply immoral thought: the car should sink. And it does.

The point here is not that it is ok to murder and then try to hide proof. The point of a story is that is gives you an experience of life which you otherwise wouldn't have had. In Psycho you become the Psycho. You feel what he feels, at least for a moment. The bravest, the most righteous person can feel fear in a horror movie. And in this the story is more powerful than morals.

Why is a story more powerful than
b ) truth

All stories, by definition, are false. Ramayan, Mahabharat, and what happened yesterday. When Tulsidas narrated the Ramayan, he exercised his creative license to delete, add and change Valmikis version at crucial phases of the text.  They all are made from the stuff of the imaginary mind, which itself does not exist. Cinema itself, is an illusion of twentyfour still frames projected per second on a huge screen in a dark theater. Even a documentary film, has a perspective of the director on which it heavily depends. On the other side of the spectrum, a film like Superman is a worldwide hit.

A film should be believable. It need not be realistic. When you buy the tickets of a film like Superman, you buy into the belief that in the world of Superman which you are entering for the next couple of hours, Superman can and does fly.

The root of all stories is drama. Be it art or commercial, realistic or bizarre,  a film’s success depends largely on to what extent the audience brought into the belief in the narrative.

A story like Cinderella is retold across centuries and to date its theme ( socially unequal couple ) is repeated in every other film.

Mahatma Gandhi, a great exponent of truth, once had an interesting conversation with Birla, his host in Delhi.
‘Bapu,’ said Birla reverently, ‘You have done so much for us. Indians will never forget you.’
‘That’s not true, I will be forgotten sooner than you would like to imagine. The only two characters Indians will never forget are Ram and Krishna.’
So even the father of the nation knew that stories are more powerful than truth.

Why is a story more powerful than
c) you.

A story is always bigger than its characters. However great Bhagat Singh is, his sacrifice is what made him great. Rajesh Khanna became a star because romance was in the air. Amitabh took over because the romance gave way to frustration and anger. Angry became the new wave.

A story is more powerful than the writer. Once the script is bought by the producer, the chord is cut. The script may be written by whoever, a film is always the director’s baby.

The script may be adapted from a book, but anyone who has loved a book will never be happy with the film. I am sure Chetan Bhagat wept when he saw three Idiots, which was inspired from his book, Five point someone.
A story is what pulls the audience in the cinema halls. The actors, or the stars, are there to act out the story.

And the biggest storywriter of all, the almighty, thinks nothing of popping a character he has so lovingly breathed life into, when he loses interest in the sand castle. Savitri was perhaps the only woman who convinced God to give her back her husband. Amitabh's character, in film after film, had to leave the earthly abode. What does not leave us, however, is their story.

So the ocean is more powerful than the wave.
- See more at: https://www.urbanpro.com/comment/saveLearningTip#sthash.YyRibDvr.dpuf
Posted by Manjushree Abhinav at 4:30 PM No comments:

Labels: How to write a story, power of a story, Sample class of Scriptwriting, story writing

Write your own story, and adapt it into a script. 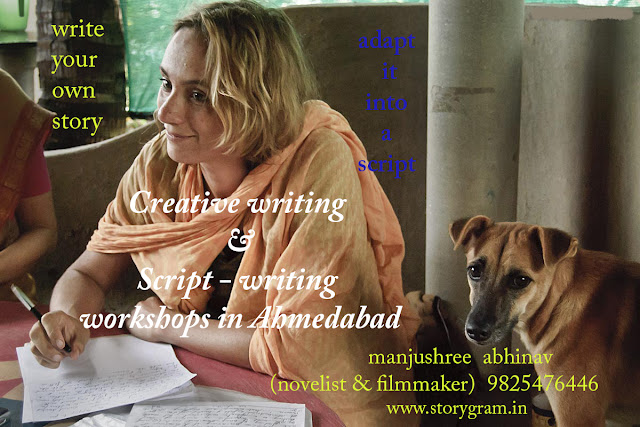 The Script Writing Course is divided into two parts, the Story and the Screenplay. All students will write their own short story and adapt it into a screenplay.

Is it true that anyone who dreams can also write a story? Is there any hope of  rejuvenating a lost talent ?Is it possible, to learn the art and the craft of writing a complete short story ? These four sessions are designed to guide you step by step to write your own short story.

Day 1 : Finding your own voice / Ras. The Navrasas, our immense wealth.
Day 2 : An exercise to deal with the writers block. Start your own story.
Day 3 : Structure of a story : Conflict and Resolution. Developing your story.
Day 4 : Making it flow : Transitions, both poetic and visual.

WRITING A SCREENPLAY
What is the difference between a book and a script? What is the meaning of the term, audio and visual?  How do we understand the concept of  'Show, Do not Tell'? How is a story transformed into a screenplay? What are the elements of the narrative that could be stretched , and where should we condense the flow? What are the tricks of the trade used by the scriptwriter ? These five sessions are designed vy an FTII faculty, to answer all these questions and more.

You will be given links to free scriptwriting softwares, scripts to read up, and some films which I would like you to watch before and during the sessions. These sessions will be evenly spaced out, once a week, so that the student has enough time to finish his assignments.
The classes will be referring to popular Indian films like Sholay, Deewar, Dil Chahta hai, Pinjar, Satya, 3 idiots, Piku, Bajrangi Bhaijan, and American films like Kill Bill, American Beauty, Little Miss Sunshine, etc. So please watch most of these films if you have not seen them, before the course begins.

Fees : The fees for this scriptwriting course ( nine sessions of two hrs each)   is Rs 12,500/- If you need support for writing a longer script, we can talk about it. Women can avail a special discount of 10%. 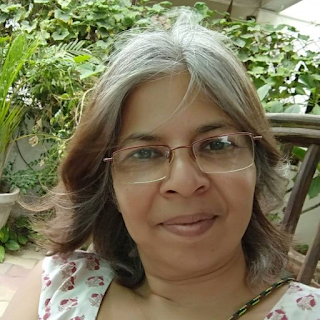 The main faculty for this course is Manjushree Abhinav, a novelist and film maker. She has taught at NID, FTII, SRISHTI, CEPT, Anant University, and Storygram.

Venue :  C9, Shree Krishna Apartments, Judges Bungalow,  Ahmedabad. If the student finds it difficult to commute to this location, the online option is available.

Contact : Manjushree 9825476446, or mail gazeatthesun@gmail.com
Posted by Manjushree Abhinav at 12:31 PM No comments: