Trust me, a book review

This is a thankyou post for my sister, Raju, for being my first teacher. After Aaee, of course. 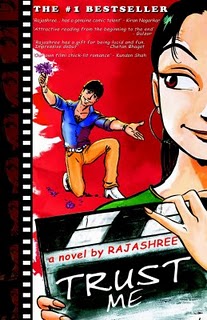 Trust me is a book for the young Indian dame, on the brink of her life. Are you wondering whether to live in a city alone? Do you experiment with life such that you cants talk openly with folks back home? And most importantly, are you glamour struck, with the glitzy filmy world?
This book is a must for every young woman with stars in her eyes who wants to make it big in the film world. Forewarned is forearmed.
Our protagonist has a filmy name: Paro, short for Parvati. With a name like that, it’s not surprising that the book begins with heartbreak. Paro, has just had an abortion. Her boyfriend ditched her, and her mother is too old fashioned to be confided in. So she is in a bad mood, and she doesn’t care to hide it. She doesn’t know how to deal with it either, so she confides in her boss, who turns out to be a lecherous old man. So what happens next? Our girl is twice as pissed, and walks out of the job. In the typical Mumbai fashion, she has to take whatever work that comes up next, a job as an assistant director, in a typical bollywood masala movie.
Paro meets Rahul, a younger, fresher specimen, with feet firmly planted in the heroism of the filmy heros. He sings, dances, flirts, and above all, he knows not to hide his love. Although his character comes through as stupid and clichéd, he has one thing going for him: a mind without the slightest doubt. A man who knows only one thing, that he loves his woman. The ultimate weapon that can win a woman’s heart-mind-soul. How long can Paro resist him?
Sample this conversation which occurs in the middle of a shooting schedule, during a lunch hour when Paro is painting the set.
‘What do you think of It’, I said, stepping back.
‘It looks, well, kind of… like a cat.’ (said Rahul.)
I’d been painting a depiction of Shiva and Shakti.
‘You could have said something worse, I suppose. Though I can’t think of much.’
‘Oh, it’s not so bad. I like cats,’ he said.
‘I prefer dogs.’
‘I know what you mean. Dogs are loving, trusting creatures. You know what the trouble with cats is? If a cat sits on a hot stove once, she won’t sit on a hot stove again. But the problem is, she won’t sit on a cold stove either.’
Their romance unravels as the delicate balance of trust and
passion heal Paro’s wounded pride.
Trust is a perennial issue that most of us are plagued with to some degree or the other. The author has delved into the issue of human boundaries with a simplicity that is as profound as it is clichéd.
There is story in the book of the North Star, Dhruv Tara, which serves as a beautiful metaphor for the yearning for security.
What I didn’t like about the book:
There is an apparent contradiction in the moral of the story. The title in the book asks us to trust, and so does the theme, but the atmosphere around the protagonist is totally untrustworthy. Set in bollywood, trust as an element, is least likely to endure.
What I liked about the book:
Among all the colorful characters in the film industry, there is one person who seems true, self respecting. But he is caught in the web of bollywood; an old, has been script-writer, Munshiji. Munshiji has ‘adjusted’ to the stupidity in the approach to the narrative structure in Hindi films.
It is through this character that the writer reveals herself. Bad or good, cinema is cinema. The creative tension that the old scriptwriter balances and plays with, is the actual dedication of the book.
The language has a smooth flow; it sprinkles on with a rhythm of a mountain stream.
““““““““““““““““““““““““““““““““““ 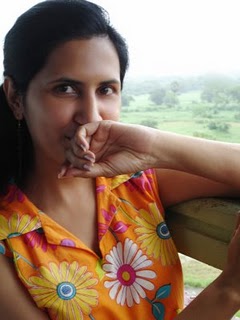 Interview with Rajashree, author of Trust Me.
Q.1.You are a trained film maker. How did you think of writing a novel?
The writing bug bit me much before the film bug. I have always wanted
to write a novel.
Q. 2. Always means since childhood?
Oh yes. In fact, it started with me failing in first standard. I
remember not understanding anything the teacher wrote on the
blackboard in the exam. It was a case of ‘Kala akshar bhais barabar!’
Someone told my mother that if you want to educate your kids in the
English medium, you better take some effort to teach them. Not that my
mother took me to task for failing. My sister, who is three years
older, distributed sweets because she had passed, and I distributed
sweets because I had failed. So it was quite cool to fail.
But after that I learnt pretty fast. The first novel I read was
‘Coffee Tea Or Me Girls Get Away From It All’. I must have been only
eight years old. I didn’t understand much but even then I was
tenacious enough to read it completely.
Q. 3. How did you get hold of a ‘Coffee Tea Or Me’ book at such a young age?
I don’t know, it does seem inappropriate. It must have been lying
around the house. But after that I started reading Enid Blyton. I must
have been nine when I wrote out a ‘list of characters’ for a novel. We
had joined a library and I loved reading books. So naturally, I wanted
to write a novel.
Q. 4.  There is an apparent contradiction in Trust Me. Does it ask us
to trust each other or to be careful or what?
The way I see it, the book is about getting over distrust and learning
to trust again. But I am not asking anyone to trust blindly.
Basically, trust is about predicting people’s behavior.
Q.5. What kind of responses did you get to your novel? Did anyone
decide not to come to the Mumbai film industry after reading ‘Trust
me’?
Oh, I hope not. I certainly did not intend to turn anybody off about
the film industry. The kind of responses I got were quite positive.
The one that comes to mind is a Times Of India reporter from Delhi.
She told me that she started reading my novel in the office and
couldn’t put it down, so she went and sat on the back staircase of the
office so that no one would disturb her when she read it.
Q.6. Why do happy endings succeed so much? Why do we all like happy endings?
Well, not all bestsellers have happy endings. Tragedies like Love
Story also succeed. But tragedies have to be really good to do well.
They have to make you cry.
But yes, mostly people like to be happy so they like happy endings. A
book generally should have both emotions, because we like to cry and
then we want to go to bed happy.
Q. 7.  What is your take on the genre ‘Chick lit’? Do you think you
have written a chick lit book?
Although I don’t like the phrase, ‘Chick- lit’, I do enjoy reading
this genre of books.
I wouldn’t like to be called a ‘Chick-lit’ writer, but I wouldn’t go
on a morcha to get the name changed. I can live with it.
I would say that ‘Trust me’ falls into the genre of romantic comedy.
Q. 8. You have spiced the language with a lot of Indian flavor. Please comment.
Yes, it was a conscious attempt, to write the way Indians speak.
Although we have a style of speaking, it is derived from what we read,
which is mostly from the west. So the influence of British English and
American English continues, as does the sprouting of words from our
regional languages when we talk.
Q. 9 ‘Trust me’ has turned out to be the number 1 bestseller in Indian Chic-lit. What is your formula for success?
I don’t have a formula, but I can reflect upon why I think it succeeded. It is a romantic comedy set in the Bombay film industry. It uses the narrative structure of a typical bollywood film and people enjoyed that. Also, since it was priced at Rs. 95 only, a lot of people picked it up.
Q.10. Ok, Rajashree. Last question: Who are your favorite authors, books?
Bridget Jones’ Diary, by Helen Fielding, To Kill a Mockingbird by
Harper Lee, and Women Who Run with the Wolves by Clarissa Pinkola
Estes are books I can read again and again. I like a short story by
Chekov: Lament. Among the Indian writers, I like Arundhati Roy. I
recently read Arvind Adiga’s The White Tiger which I found
mind-blowing.
Posted by Manjushree Abhinav at 12:01 PM

Videocon is the trusted brand that India should be proud of. After creating millions of satisfied customers, this time its turn to enter the mobile market regiment. The brand reputation that Videocon has in its intangible asset has worked in this venture as well. One can check out www.rightgadgets.in/it.asp?C=Videocon&it=Videocon-Mobiles-Phones&ct=1 for more.