Film Making Course on Sundays from October to December '12

Admissions for the currant batch are closed. The next four months batch of film making will start sometime in January. Please call me at 9945192862 or mail me at manjushree.abhinav@gmail.com for further enquiries.

Learn to Film your Dreams at


FINAL CUT
Make your own short fiction films in four months on Sundays!

Manjushree Abhinav, a film-maker, novelist and teacher, is organizing the fourth batch of the course in film making, from concept to screen, on Sundays over four months, in Bengaluru. Manjushree has taught at the Film and Television Institute of India, Pune, NID ( National Institute of Design, Ahmedabad), and Srishti, Bangalore.
This Weekend batch organised by Manjushree Abhinav has a great faculty, reasonable fees and a convenient location. It gives people the opportunity to learn film-making without leaving their jobs or studies.
So you can now follow your dreams while taking care of your responsibilities.

The story we have structured in the creative writing workshop, we will stretch out into an audio visual script. We will understand the elements of Scriptwriting: Characterization, Plot, Setting, Theme. Students will pitch their scripts to the batch, and a few scripts will be selected to be developed for shot breakdown and dialogues.
(Those who want to study only script - writing, the fees is rs 11600/)

An introduction to Animation techniques, sketching, story-boarding and planning. Students will make a 10 sec animation in the method of their choice.

The final project of the course will be to make a short fiction film with a small group of students, depending on the script that is selected.
Here is one of the films we made in the last workshop. Its called , The Skipping Rhyme. An old man gets an answer to a deep question from a little girl : http://www.youtube.com/watch?v=I9jPvErYrwM
CONTACT :  Manjushree at 9945192862. You can also email us at  manjushree.abhinav@gmail.com for more information.
VENUE : Bangalore Film Society, 4th cross, Thyagaraja Layout, Jai Bharat Nagar, Banaswadi, Bangalore.
DURATION :The course would span across four months of weekend classes, mostly on Sundays, from October to December 2012.

The film making course includes creative writing, script writing, acting workshop, camera practicals, elements of editing, Animation Workshop,  and making the short film, during four months of weekend classes.
The total fees for this course was INR Thirty two thousand and eight hundred, (Rs.32,800/). If the fees is paid in one single installment, there is a whooping discount of Five thousand rupees, which means the total fees would be only Rs 27, 800/ -
The course fees cover the classes, the visiting faculty’s fees, the cost of making the student film, and study material like books and cds. A donation of Rs 500/- would be given from every student’s fees to a children’s charity.
DISCOUNTS 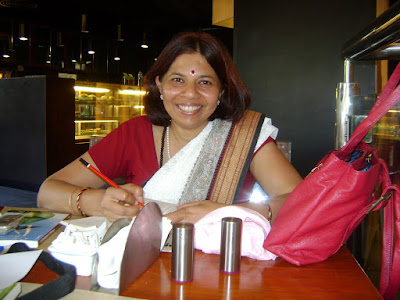 Manushree Abhinav has authored a novel, ‘A Grasshopper’s Pilgrimage’.

She has also conducted several creative writing workshops at the Times of India Nalanda group, Bangalore, Ahemedabad and Mumbai. This is the third batch of film making workshops she is conducting in Bangalore.

Posted by Manjushree Abhinav at 3:28 PM