A few weeks ago, I asked my 'creative writing' students, to write their parent's love- story. The story would read not from the first person perspective, but as any two people. The intention being, in the attempt to find your own voice, it is a good idea to recognise your parent's voice in yourself and then to detach from it.

Some of them called up their parents to ask for details, some used the creative license. Most of them came up with humorous pieces, of how their parents met, fell in love, struggled with in-laws, and then married, and are living happily here and now.

Why, then, was I so disappointed? They had followed my brief. A love-story, in hindi film terminology, ends in marriage. It has a happy ending.

I wished then, that someone would give me the same assignment. I will begin with a divorce, go into flashback, and tell the love-hate-story. Was I the only kid who had witnessed trouble at home? And if all my students had sugar and sweet in their pens, what were they going to write?

And then, I met Amandeep Sandhu. He was carrying a book, one that he had written, called, 'Sepia Leaves.' 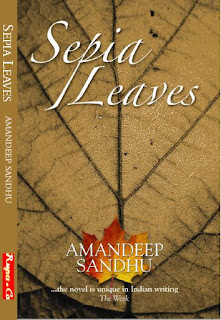 Sepia Leaves is a love-hate-love-story. Of a family. Written in first person, from the child's perspective. This book has touched me so deeply, it is difficult to articulate myself. I cannot, if I have an ounce of a reader in me, comment on this book. I can only respond. 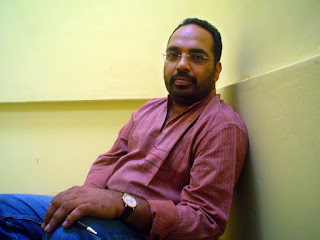 The story, in short: Appu is seven year old boy. His mother is suffering from schizophrenia, which leads to frequent violent fights between the parents. To have some order in the house, the father brings a maid servant. Mamman, as Appu calls his mum, suspects her husband of being unfaithful to her, and the fighting escalates. Baba, the dad, is a simple person who is clueless as to how to deal with his wife's temper tantrums. The extended family, instead of accepting the illness and attempting to cure it, adds fuel to fire and the family splits.

Mamman goes back to her father's house. Appu is sent to live in a hostel, where he learns to ward off the sexual advances of his peers, and misses his family. When he sees a coach of a goods train with the words, 'Not to be Loose Shunted' written on it, he feels that someone should write the same on him. 'I too was a part of a family and should not be moved around, alone.'

How the family comes back together and survives as a unit, forms the rest of the novel.

The appealing quality of this story lies in its simplicity, its adherence to truth. Truth in the voice of a seven year old. The flow is so smooth, it is virtually indiscernible.

And the charm lies not in the narrative, but what it evokes in you. How do you deal with your own craziness? How do you relate to your own relatives?

To begin with, you allow your thoughts to dwell on the mad moments without guilt, without judgment, the way Appu accepts his Mamman. And then, if you have a seven year old at home the way I do, you realize your worth, and you thank the universe for the opportunity to be someone's Mamman.
Posted by Manjushree Abhinav at 11:23 AM

Will look out for the book.

that is true,each moment of life is an opportunity, the real earning in the life is generating the capacity to give. that man is richest who gives out the maximum. and where all comes from is within. love is such a state, mother feels the son, son feels the mother, and they both always know to what extent they can pull the string. yet they are always inseparable because mother is always mother, eternally the mother.
our lives are so beautiful and we can make the place we live better than heaven as the language which is uniform, that is the language of love. and that is the bond or that is the love which makes one accept each other as one is.

Will surely look out for the book...

BTW loved your idea of the assignment you gave to your students and your perspective of seeing the other side was too good :)