after the person passes away, me thinks. At least, the mischief continues. As he left us, Habib Tanvir played a practical (or rather, mystical) joke on three of us: Tom Alter, David Israel and I. 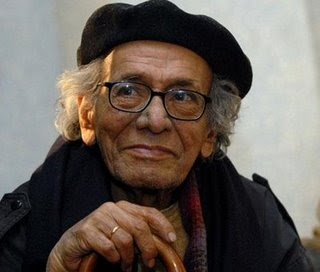 'May I have Tom's phone number please? Habib Tanvir has passed away and I have to tell him the sad news.' read an sms from David. I immediately smsed him back Tom's number.

A couple of days later, I got an email from David, one of those which is addressed to someone else and you are added in the address:

Dear so and so,

An interesting / amazing little incident, or story worth telling. This followed from your phone call to me yesterday with news of Habib Tanvir's passing away -- and suggestion I convey the news to Tom Alter.

Initially I'd tried telephoning Tom. Not getting through, I tried sending him an SMS message. Here, too, it wasn't clear if it had reached its destination (status "pending" per Airtell). So I tried phoning him again yesterday evening . . . and indeed
I reached him. BUT . . . the manner of reaching was unusual.

He picked up the phone, I addressed him, he said -- "How did you get me here?" We spoke further: I asked if he had yet received the news about Habib Sahib. He had not -- and was thankful to get the news (while naturally sorry to hear it). . .

But what was peculiar was this. He was not answering on his own mobile phone (which I had dialed). He was instead standing in an STD booth at the airport in Bombay, answering on the STD land line! He told me he had just picked up the
phone intending to dial my friend Manjushree Abhinav (in Bangalore -- our mutual friend who'd introduced me to Tom).

Instead -- without the phone so much as ringing -- he simply suddenly found me on the line addressing him.

There is absolutely no physical / electronic explanation for this -- or none I can think of. Evidently, Habib Sahib had (as one may say) "put the call through." Or this seems a reasonable surmise from the evidence.

It struck me as a pleasant hat-tip from the dear man -- and perhaps a sign of ongoing, good-natured mischief.

I was a little surprised, but not totally convinced of the 'miracle.' I know that Tom does not carry a mobile phone with him, and I had sent him the number that Tom called me from. I was sure David and Tom had had some misunderstanding. Till I got a mail from Tom, which explained the mystery.

dear manju -- i do not think i told you -- the day habib tanveer died, i was at bombay airport on my way to delhi -- i was at the same std booth from where i had called you the day i flew down to bangalore for your amazing reading -- i think you had given david that number thinking it was my home number -- anyway -- i pick up the phone -- and without hearing any ring, i hear david's voice asking how i was -- and telling me that habib-sahib had passed away -- manju, it was if a voice from heaven had reached me -- i had met tanveer in bhopal soon after the reading as david had told me he was very unwell -- then, on the day of his death, david reaches me at an std booth where the chances of reaching me at that very moment are one in millions

it really, truly happened -- it is all to do with your energy -- love, tom
Post script: Mom just called and told me that a song I loved as a teenager, taught by my grandmother, is in fact written by Habib Tanvir.

These are the words:

the day has sunk, and the earth is shadowed by night
under the cool sky,
a gentle song for peace
let there be no war


Now that I know you, I weep for you, Habib. I have loved your song so much. It has touched, caressed, stroked and healed a wound so deep that I have forgotten where it came from. The art has knit itself around my heart, the artist was forgotten.
Posted by Manjushree Abhinav at 7:53 AM

First time to your blog!! wow.. a great coincidence or miracle!!!

Oh . . . so (in point of fact) evidently there WAS a "physical / electronic" explanation for how the call went through to that phone. Still and all, the chances of catching Tom back in that same phone booth . . .
Thanks for clearing up (or rather, for fine-tuning) the mystery. :-)

This really is an amazing story. I must thank David for sharing this link with me. Of course, I plan to be a regular here now.

This gave me goosebumps.

The song is to be sung on a boat at dusk. There is to be no sound other than of waves. And no lights except that of the fading sun.
Can you get the full song?
love,
Aai